Most who know Tom, know him as a thoughtful, caring man – as dedicated to his craft as he is to the people in movement he documents. Tall and lanky, camera-vested, hat on backwards (because that’s what photographers do), always helpful and full of story, Tom is love incarnate, dancing with the camera.

If a picture is worth 1000 words, Tom has at least that many for each of his pictures. He has watched a movement unfold through his lens, and he has played a part in its unfolding. He knows the people, the purpose, the fun stuff, the hard. He’s been in the trenches capturing the struggle, the effort, the successes – the ongoing press for equity.

As a photojournalist, he has been involved with assisting and documenting the disability rights movement since 1985. He first became interested in disability rights when he worked as an orderly at a rehabilitation hospital in Grand Rapids, Michigan at the age of 19. He got his start as a photographer after originally working at a video production company while in college at Berkeley, and he started to take photography classes at a community college. He also became an attendant for people with disabilities in the San Francisco area, so his first photography subjects were people with disabilities. He photographed the founders of ADAPT at a national action event in Los Angeles in 1985, which led to his interest in being a social documentarian for the disability rights movement.

In addition to documenting the ADAPT movement he has documented many other disability rights events such as the Atlantis Independent Living Movement in Denver, which focused on deinstitutionalization. He worked for Mouth Magazine, a bi-monthly disability rights magazine, from 1995 to 1999, and his photographs continue to be featured in magazines, books, documentaries, in museums and on walls across the country and around the world. 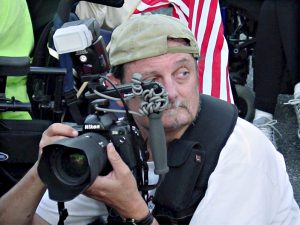 Tom has friends everywhere. With so much equipment, he has driven rather than fly – at first in his van, then in the “Road to Freedom” bus. For as long as anyone can remember, traveling from action to action, event to event, Tom has had a network of landing spots – friends he could call across the country, with homes for the night, or for however long. (Some of us even have a “Tom Olin” room at the top of the stairs.)

These days, health has dictated a slowdown. Tom still travels, just not as much. Today, Tom is working on a number of projects. His passion is enlightening and empowering the next generation: keeping the Disability Rights Movement and story alive for the young people now living better lives because of the efforts and people who went before.